Professional:
​
Logan is a Licensed Prevention Specialist, and the Director of Prevention for the Southwest Behavioral Health Center as well as a Regional Prevention Director for the state of Utah. He started in prevention as the president of a college prevention club while attending Utah Tech University, and has worked as a Program Supervisor in Youth Corrections. His undergraduate degrees are in Criminal Justice & Psychology, and he has graduate degrees in Sociology & Mental Health & Wellness. Logan is a Co-Founder of the Utah Prevention Coalition Association and emeritus Chair of the Utah Prevention Network, and a graduate of the National Coalition Academy. He also teaches sociology at Utah Tech University. Logan has worked for the Southwest Behavioral Health Center since 2008, and absolutely loves his job and his colleagues!
Personal:
​
I tell people that I'm a "Southern-Utah-boy". I was born and raised in St. George, and the mountains, desert and red rocks of Southern Utah are where I feel most at home. I graduated from Snow Canyon High School (so I'm a Warrior at heart,) and then attended Utah Tech University, (back then we called it Dixie College). While at UTU I got my first taste of prevention work as the president of the college prevention club, REACH (Rebels Extending Awareness, Care & Hope), and my first experience working with the prevention staff at Southwest.

I got married to the most amazing person I've ever met and followed her to Southern Utah University (SUU) where I started working in Youth Corrections and got my bachelors degree in Sociology and Psychology, with an emphasis in Juvenile Delinquency and Deviance. I became the Director of a Youth Correctional Facility, which had me working with the Southwest Center staff again, and became a youth advisor to an anti-tobacco advocacy group, where I again worked with the prevention staff at Southwest, (and Teresa officially became my prevention trainer). I became frustrated with my experience in youth corrections, trying to help kids who were already struggling with addiction and mental illness, and I realized I would much prefer to spend my time trying to prevent those problems from ever occurring.
I left SUU and headed to Utah State University for graduate school, where I studied social theory and research methods, and then I was finally able to come back to Southern Utah when I got hired as a prevention specialist at the Southwest Behavioral Health Center. I was lucky enough to get hired under the tutelage of Allen Sain, who trained me and helped me get my license as a prevention specialist; and then I was able to follow in his footsteps as the director of prevention services for the Southwest Area. To further my education, I obtained a second Masters degree in Mental Health & Wellness from Grand Canyon University, with an emphasis in Prevention Science.
​My wife is a school teacher in Washington County and this is our home. I love this area. I love the people, the culture, and the environment. I consider myself lucky every day to have my dream job, in my dream location.
Why I chose prevention:

As I mentioned above, my time in youth corrections resulted in frustration. I would work with youth dealing with problems that were unimaginable to me prior to getting into that field. But treatment works. I saw it every day. These kids improved, they overcame, they healed. But then I would send them back home and within months they were back in jail. Why? Because all of the external influences that originally got them into my program, (i.e. family conflict, poor parenting, negative peer relationships, poverty, lack of laws and policies to protect, academic failure...) they were still all there, and they brought the youth back down very quickly. I realized that the true fix to the problem had to involve a change in the environments these kids came from. We needed to prevent them from ever becoming violent, addicted, depressed, etc.
​
I went to graduate school and was introduced to Risk & Protective Theory, the Social Development Strategy, and the Public Health Model, all of which outlined the importance of reducing the things that put us at risk for negative behaviors. And then, my sister sent me a job posting for a prevention position at the Southwest Behavioral Health Center, (she wanted me to move back closer to home). If you would have asked me to write a job posting for my dream job, I don't know that it would have been much different than the posting she sent me. I submitted the application, showed up for the interview, and started at Southwest Prevention a week later. 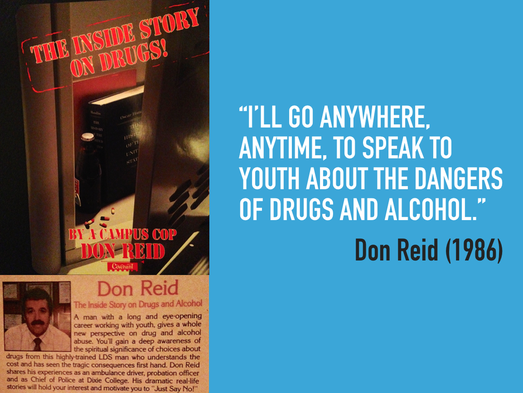 Prevention is in my blood. My father is a 42-year veteran police officer, and when I was little he got involved in prevention services. He actually worked for Southwest Prevention teaching Alcohol and Tobacco Psycho-Educational courses. He became a sought after speaker on the dangers of alcohol and drugs and even published an audio book of one of his seminars; and I got to travel all over the Western United States with him listening to him speak about the importance of living healthy and free from addiction. He was passionate about prevention work, always telling people that he would "go anywhere, anytime, to talk to youth about the dangers of drugs." It wore off on me, guiding me into youth corrections; and when I saw that posting for a prevention position I jumped at it. It was a chance to follow in his footsteps, and a way to finally do the job I had been looking for, and do it back in my hometown.
It was supposed to be a temporary job, a three year assignment... but it sucked me in. I love being involved in an occupation where the goal is to help people, to improve our communities, to make the world a better, safer, happier place. I love working in an environment where everyone shares that goal. My coworkers all do this job because they want to help people. And they motivate me and support me and uplift me and remind me what's truly important about life. I don't know that I could ever find as much satisfaction in another field.